The neural basis of bat sonar 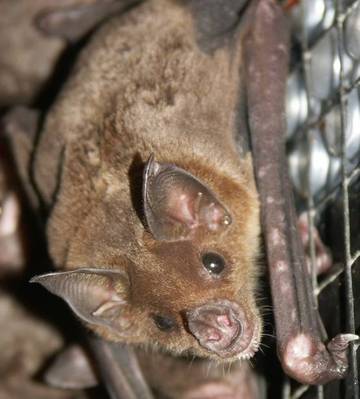 Navigating on the wing in complete darkness is a challenging task for echolocating bats. It requires the detailed analysis of spatial and temporal information gained through echoes of their ultrasonic calls. Thus, neural encoding of spatio-temporal echo information is a major function in the bat auditory system. The auditory extraction of both temporal and spatial characteristics of echoes referenced to the emitted calls is essential for detecting prey and avoiding obstacles.

From the high number of echoes reflected towards the bat only few might provide useful information about objects of relevance. In addition, the information is highly directional. This spatial directionality is mediated by the interaction of the large sound-transformation structures (ears and nose leaves) and the high frequencies used by bats.

How does the bat auditory system deal with the complicated task of analyzing complex echo-acoustic scenes? How does a bat select objects of special interest from the multitude of echoes? And how are dynamic changes of echo-acoustic information induced by motion of the body, head or the large pinnae processed (and exploited) by the auditory system?

A new project recently (2016) funded by the HFSP grant  "The first mammalian model for vocal learning: a molecular, neural and comparative approach in bats".

The project is part of an international research effort that includes the Max Planck Institute for Psycholinguistics (MPI) in the Netherlands,  the Faculty of Biology LMU (Munich), and the University of Californina, Berkeley(USA).

Funding of recent and current projects: